This past week we remembered the tragedy that occurred on September 11th, 2001.  I remember where I was that day – eating breakfast in my college cafeteria.  I saw people crowding around the TV in the lobby and I went out, horrified to see what had happened.  Classes were canceled.  The next day we had a special chapel service to pray, read Scripture and to talk about what happened.  On September 11th, 2001 we were scared, sad and a variety of other emotions – at least most of us were.  I went to the chapel to pray and since I knew some people who were in the twin towers, in NYC, etc. I was asked to read Scripture at the special chapel service on September 12th.   One passage I remember: Proverbs 18:10 “The name of the LORD is a fortified tower; the righteous run to it and are safe.”  Reading the rest of the chapter is quite provoking too.  When the physical, even in great cities like New York, fails we become shaken – the God of the Bible provides a strong foundation to get through the tragedies of life.

Some of my friends at college did not react overtly emotionally to September 11th like I did.  They didn’t have the same connection to NYC (or Flight 93 or the Pentagon), and some were dealing with other issues (i.e. a sick family member & new marriage engagement) and wanted to block out something sad like what happened on September 11th.  Looking back I understand why they behaved this way, but I hope that now looking back they are able to have compassion on the tragedy that took place.  It’s hard to process tragedy.

For the first couple years out of college, I went on to teach at a high school and I taught the son of a man that died in one of the twin towers – I taught him just a year after the horrific event took place.   He knew God, and had such an amazing peace to him.  I also attended church with a man who escaped from a 90+ floor of one of the towers – he ended up on the front of the London Times.  On the cover of the London Times he was covered in soot.  He told me that his son living in London was shocked to see his dad on the cover.  It was a miracle that he escaped.  So many stories of miraculous escapes and heroes from that time.

To this day I still have a pair of socks that haven’t worn out – I’ve had them for over 20 years.  It’s amazing to me, but it may seem strange to you that I comment on my socks until you see them in this picture: 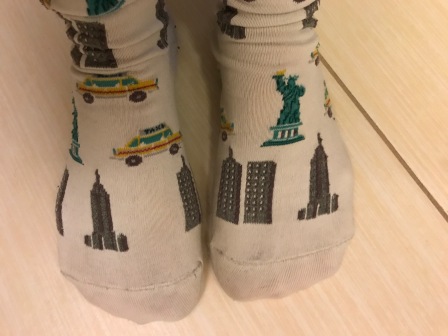 It may not be a big deal to some that I still have them, but I knew it was for a reason when my daughter in second grade learned about what happened on September 11th for the first time this year in school.  It took me by surprise as I thought she was too young to process such a horrifying concept.  Then I showed her these socks.  I think by looking at them she realized that the event that happened was real, but it was also amazing that I still had these socks after all these years.  I told her that God was bigger than any tragedy.  She told me that God uses tragedies caused by human sin to point us to Jesus.  It was amazing what God worked in her heart, so I wanted to share it with you.  Hope you find peace in what truly brings peace – don’t settle for the imitation.

View all posts by sharingtheworld